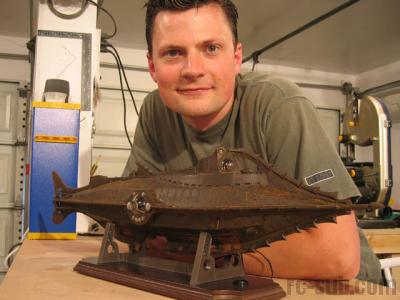 The following projects show several static display models of the Nautilus that I've created over the years.


March 15th, 2005: The salon interior is nearing completion. The detail pieces have been completed, including the salon organ, couches, specimen table, hutches and a myriad of other small detail pieces.

Note the working salon irises that will be operated by manual lever. Also note the scale divers, complete with removable helmets!


April 11th, 2005: Progress is a little slower than I'd hoped, mostly due to some house renovations that I've got going on. I have, however, completed the majority of the salon piping and a few more detail pieces for the interior. I estimate another hour of work to complete the interior pieces and then it will be ready for priming and painting.

I have also received my lighting kit from Voodoo FX. Randy offers an excellent LED lighting kit, complete with driver boards, power source, LED lights and wiring. I elected to go with this kit over making my own mostly because I was anxious to get this project completed and also because I had a credit with PayPal burning a hole in my pocket :-).


April 13th, 2005: Progress continues! I've layed down some paint on the interior, a bronze spray paint from the local hardware store. I've yet to weather or detail it, but it adds a lot of character to it already. Also note my scale carpets, printed off the internet and cut out to size!


April 28th, 2005: Progress is a bit slow, but it is coming along. I'm still hoping to have this model completed within two weeks from now. I guess we'll see if I can do it. I have painted and weathered the interior parts, fabricated the brass railings, and besides adding a few paintings and other detail pieces, have completed the interior.


May 2nd , 2005: Lots of progress over the weekend! I've began assembling the hull and have also begun work on the installation and soldering of the lighting system. I've split the lower hull into three pieces, which when assembled, leave a virtually invisible seam (more pics on that later). This will allow access to the internal workings at a later time, and allow viewing of the detailed salon from time to time.

June 22nd, 2005: A big jump in progress! I've assembled most of the components of the kit, and have painted and weathered it as well. The only thing left to do is put on the viewports, the salon window guard, and build a custom base that will house the main power switch.

The painting was done with a base coat of Krylon Bronze spray paint, followed by a thin black wash to bring out the details. A rusting kit was then used, tricky to apply, but satisfying in the result. A coat of semi-gloss clear laquer followed, and it was finished up with a few choice streaks of thinned white at the corrosion points. The pictures really do not do the model justice in real life, as the camera seems to have picked up the rust a bit more than it should, especially from the scuppers.

The lighting is complete as well. I exchanged the stock 9V adapter with a 6V, and even then, the lights are too bright. They are painful to look at, and make looking in the salon a bit difficult (as you can see). I will research further stepping down the voltage for the salon floodlights only.


June 27th, 2005: Done! Besides creating a really awesome nameplate for my display stand, the model is finished! The base was made from 3/4" MDF, routered with a neat bevel and painted a metallic brown color to accent the model. A switch was installed in the base to allow me to turn the lights on and off at will.

The squid needs some paint to make it more realistic and to get the rubbery red look covered up. It adds a neat dimension to the model, but I won't display it until after I repaint it. resources/modelpics/Nautilus/doneside.jpg

The last picture in the series shows the place of honor that the model has in my office, right over my desk.


January 9th, 2006: This model is slated for a new home, and as part of the deal, I actually got around to installing the operational irises that I'd always hoped to. I'm glad that I had the opportunity to put them in, as they look like they'll be an awesome addition to the model. Here are some of the preliminary pictures. I should have the irises completed by the end of the month:


January 16th, 2006: Done! The irises actually turned out better than I'd hoped. The actuation is simple and fairly smooth. The only gripe that I have is that the fishing line that I used to actuate the irises tends to stretch under load, causing a bit of slack under tension. Not a big deal, and it doesn't affect the workings, it just looks sloppy when you watch it work... not that you'll ever see it working when on display, but I'LL still know!

What I did was build in a hidden key system that allows the irises to actuated by inserting the key and twisting it about two revolutions. Two two irises are linked and actuate together. The effect is really great, especially when the exterior floodlights are dimmed and you can see the interior through the moving irises!

Feel free to email me with any questions you might have.

This kit was a project that was sitting on my shelf for a long time before I finally decided to do something with it. I elected to see how easy it would be to throw some rudimentary RC gear in it for surface running. It turned out quite well, however it was somewhat slow in the water. Through another deal, I managed to secure an unbuilt "next generation" TI kit, so I decided to sell the RC'd one that I'd just put together. I did so in the fall of '05 for a sum of $750US. Here are some pictures to give you an idea of what a heavily rusted TI kit looks like when complete. This model had a full lighting kit installed in all applicable locations using incandescent grain of wheat bulbs.


This was a commissioned piece that I took on for a Mr. William White out of New York. The little Airfix kit is very detailed, and though it is quite small, the rivet patterns are intact and the overall look of the filming miniature is well-preserved.

The model is constructed from white resin. The castings are crisp and go together with minimal filling and sanding. Lighting was handled through the use of a single white LED placed between the salon windows. Openings were added for the Alligator Eyes to let light through in those positions. The raker arch was slightly modified at the customer's request to more closely follow the full-sized deck set's look and feel.

This project was created from a Custom Replicas 1/32 scale kit (Generation 2). It featured a fully scratchbuilt salon with all applicable lighting.

Martinification of a Master Replicas Nautilus model in 1/69th scale:

What the heck is a Martinification? Well, as a bit of background, you need to know that the MR kits are a limited release, pre-built model cast in very thick resin. The kit originated from the Brodeen 1/69 kit (the same one as the following buildup). Unfortunately, it is cast in a single piece of resin, and features no lighting and a very rudimentary wheelhouse interior. My plans are to add a full lighting kit and finish up the details in the wheelhouse to make it a far more interesting display piece.

Step 1 is to remove the wheelhouse and salon bezels in order to gain access to the interior of the model. Doing so took some very careful prying with a small, sharp screwdriver and some creative cutting with a scalpel. I'd guess that it took me about 30 minutes to get it apart to the point you see below. The lighting kit that I will be installing is one from VooDooFX.com. The kit comes with everything you need, including wire, resistors... everything. I sell these kits through my other company, the Nautilus Drydocks. If you'd like one for your model, just let me know and I'll hook you up!

The next step is to bore into the model. Doing so destroys the iris detail on one side of the model, but that is fine, as I've got some special plans for that section! I used a standard hole saw to do the cut, and it turned out just fine.

The finish is my standard bronze base with authentic rust wash. Its a really great looking model, and while the amount of work was huge, it was worth it. I don't know that I'd do the modification to an existing model again, especially the MR, as it is very thick resin and trick to get into and modify.


A nice, little kit with incredible detail on the hull. The model is created by Scott Brodeen and marketed through the Nautilus Drydocks.

I added a lighting system, of sorts, by using a special glow powder obtained from Glow, Inc. I simply mixed the powder with a bit of clear resin and poured it into the lighting recesses. The effect is spectacular, and the output of light from the powder is unbelievable. The pictures below have not been modified or touched up at all. You be the judge!


The other model started out as a very badly put together display piece that was given to me in trade for another model. The salon sections had been roughly bored out and a very amateurish attempt had been made to light the kit. I removed all of the associated wiring and incandescent lights and covered the resulting holes with solid resin view ports. What I was going for was a replica of the Disney 50th Anniversary Model Kit, which is finished in an aged bronze finish. The ports of the Anniversary Nautilus light up in blue with a switch controlled through the skiff. I think I got really close, and I really like how it turned out!

I've complete the buildup of this model for a customer of mine. It features a fully detailed interior, working propeller, and working lights on three channels. The build was fairly straightforward. The only hiccup occurred when two of the LEDs on the starboard side ceased functioning on me. I have a hunch I got a couple of bad resistors that allowed the LEDs to blow on me, however they were fortunate in that they were located symmetrically on the bottom row of floodlights. It is still distressing to me, however it looks good!