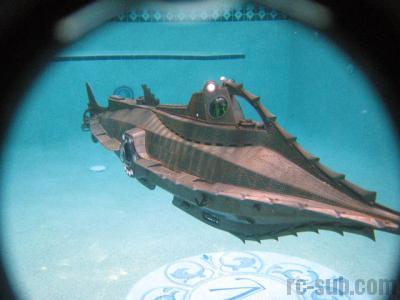 This page is dedicated to the construction and buildup of a 1/32 scale Disney Nautilus kit from Custom Replicas.

These kits are 66.5" in length and feature amazing details. This buildup is being undertaken for a Nautilus-lover here in Florida, and will be built to his specifications with my guidance. The WTC is scratchbuilt and the model is slated for a full lighting system.

The kit from Custom Replicas is of superb quality and suits R/C conversion very well. You can order your very own kit by visiting http://www.nautilusdrydocks.com.

The buildup for this model will commence within a few weeks, but in the meantime, here are a few photos of the crate that the model arrived in as well as some of the pieces that come with it. Note the amazing details that Custom Replicas put into this model. The kit arrived in superb packaging an nothing was missing or damaged.

The build has commenced! The lower hull details have been started on this model. I've also taken the big stem of splitting the lower hull for access to the WTC and linkages and I've CA'd the hull halves together.

Lead ballast has been placed in the lower access hatch. The lower keel is hollow, which allows for this weight to be nice and low in the model to help give it a great, natural static stability. Remember, the law of subs is "weight low and flotation high"!

Notice the precise fitment of the two hull pieces on some of the closeup shots. The two hull halves required no prep work for such a tight fit. Next step is to fiberglass the two hull halves together and install a reinforcement around the opening of the lower hull so that the lid is good and tight when installed.

Where has the time gone! Things have progressed very well, and I apologize for the lack of updates here. I would put this model at about 14 days from completion, depending on any unforseen circumstances. I've selected a bunch of photos taken during the construction phase for viewing below.

The mesh floor of the wheelhouse is actually stainless steel mesh.

The WTC was constructed from clear polycarbonate tubing and endcaps used in the sewage system for RV campers. The manufacturer is Valterra, and most RV stores online carry the product line. It works great, and I'm very excited to see how it hold up in actual use. A brass propel tank was custom built for this model, and should hold sufficient liquid gas for over ten full blow cycles of the ballast tank. A remote filler hose makes refueling the ballast system a snap without needing to take the model from the water at all. A custom build emergency buoy system consisting of the model's skiff (hollowed out and filled with foam), a solenoid and an electronic timer will provide emergency backup in case of catastrophic failure or loss.

The model will be running off a 14.4V NiMh battery with 4.5Ah capacity housed in the forward WTC section.

The Nautilus is reaching her maiden voyage within a week! I had a business trip that took me to Canada and New Zealand for a month, however I am now back and just finishing up final trimming of the boat. Preliminary wet testing went extremely well, and I look forward to putting the model in the nearby lake where I can really open her up and see what she can do.

The final trimming of the Nautilus took place last night in my pool. I have completed work on the emergency buoy system for this model, which consists of a timer module hooked up to a solenoid that pulls a pin after 45 minutes, releasing the foam-filled skiff which is tethered to the model via 20 feet of fishing line. Along with that modification, I also added a remote switch for the lights, added a safety catch for the front latch, and secured the salon window bezels more securely with additional magnets and metal. This model submerges on a perfectly even keel, and I am very happy with how it turned out.

Final testing and her maiden voyage should take place this week, at which time I will post more photos and video of her in action. In the meantime, here is some video and some pictures of the final trimming!:

The maiden voyage has occured! We chose the man-made lake at the Quarry here in Naples for her first trials. The water was bathtub warm and fairly clear. There was a substantial bank of weeds about thirty feet out, however the bottom up to that point was sandy, soft and clear!

She performed beautifully! There was a small issue with my emergency buoy system not being adjusted properly, and it popped after only a few minutes of operation. The good news is that with just a turn of the skiff, it was locked down and the model was ready for more operations without a delay!

Speed was not quite as fast as I had anticipated, however in retrospect the Nautilus' hull is not conducive to speed at all, with tremendous drag induced by the salon pushouts and the thousands of rivets on the hull. She did put up a huge bow wake, though, and was very impressive on the water. That is really the advantage of having a substantial hull!

The turning radius I would estimate as being 18' in open water. I think that could be reduced with the addition of a clear rudder addition, however for lakes, it is just fine! Diving was perfectly flat and very predictable.

We did have one "incident" however! Both the owner and I were having so much fun and concentrating so much on taking photos that we neglected to count the blow cycles, and the model ended up out of gas for the ballast system! What ended up happening was that when Al, the owner, let off the throttle as a precaution, the model settled onto the weedy bottom of the lake and became entrapped to the point that it could not force its way through the weedy forest and back to shore. Al and I bit the bullet and elected to wade in after it immediately. Fortunately the water was very warm and fairly clear. After only five minutes of searching, we came across the Nautilus resting peacefully waiting for us to find her. The very bright LED lights (especially the tail light behind the skiff) made finding her a lot easier. We brought her to shore, checked out the systems and popped her back in the water for a few final shots before we packed up for home!

All in all, a very successful first voyage! Both I and Al were really happy with her performance, and she will no doubt be a huge head turner both in and out of the water at the pond wherever its taken!