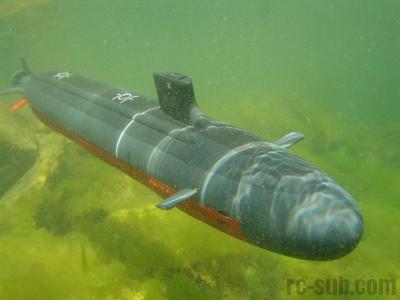 This page is dedicated to the construction and buildup of my 1:96 scale Thor Design Seawolf Submarine kit.

The kit was purchased from a friend who lived up-island from me. He'd gotten in a bit over his head, as the model needed a complete overhaul. I forsee getting it wet within the next couple of weeks.

The Seawolf-class attack submarines (SSN) are quieter than the previous Los Angeles class, faster, have more torpedo tubes, and carry more weapons. They use the more advanced AN/BSY-2 combat system, which includes a new larger spherical sonar array, a wide aperture array (WAA), and a new towed-array sonar. Originally intended as a fleet of 29 submarines to be built over a ten-year period, the end of the Cold War and budget constraints dropped that number to three and led to the design of the Virginia class submarine.

I have begun the extensive modifications that I feel are necessary in order to get this model up and running. It came with a ridiculous 12V, 600mAh battery, which I have replaced with a 12V, 7Ah setup. It will take a lot of foam to offset the weight, however the extended run time will be well worth it.

The D&E WTC that came with it is in decent shape. I redid the servo rack and added a dedicated 5V battery back for the receiver. The WTC came with a speed controller, failsafe and automatic pitch controller, all of which work just fine. I have set it up so that the rear planes work as a stand-alone system to keep the model level, and the front planes will control the depth through the transmitter.

All of the linkages need to be reworked, and I've got the rear planes completed with just the front to go. That will be a bit trickier, as the front planes are part of the upper hull, which is a separate piece from the lower hull that houses the rest of the control surfaces and the WTC.

All in all, this is a great model. The paint job is actually pretty good. I really like the waterline work done to it. The lighter color will be easier to see underwater as well.

Enjoy the pics and look for updates soon!