CARS! - Some of my project cars 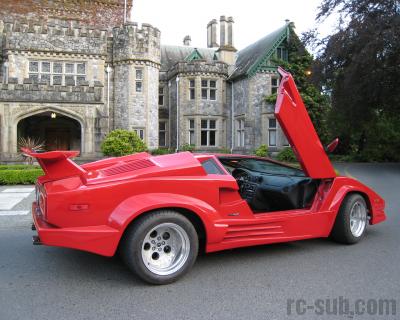 No, I'm not ridiculously rich or famous. As you'll see from my postings below, I started out with my love for cars with an investment of $8,000 in my Lamborghini Replica Project. Through a lot of blood, sweat and tears I've slowly sold and replaced my cars over the years, each one just slightly more exciting than the last.


This project grabbed my attention through an eBay ad that I found. The seller was selling his 80% complete project that had a bit of an incident with fire after an incorrectly installed exhaust system got too close to the fiberglass body and.. ah... set it afire!

Fearless and very foolish, I grabbed the project and began the long odyssey to get the car repaired and completed.

This replica was built on a Pontiac Fiero chassis, which is very common in the replica car scene. The mid-engine platform had decent rigidity and was easily modified to accept the Lamborghini Countach body. It came with a mounted 350 cubic inch chevy powerplant, which gave it lots of "get up and go"!

I learned lots throughout the project, and finally got it on the road after about a year and a half of long hours and hard work. The final project turned out very well for my first foray into the kit car scene, and I'm happy with the end result!


This car was purchased as a salvage vehicle out of Utah. It had a bad run-in with a sign or some other quasi-immovable object.

I ended up replacing the hood, front fascia, rad, oil coolers, and a bunch of other parts in the front end, including the front frame clip. It was definitely more work (and cost) than I'd anticipated, but I came out okay in the end.

This was a stock 2001 RT/10 (roadster) with 450hp. In the years that I owned it, I installed a lot of upgrades, including a supercharger, full exhaust, custom paint and stripes and much more.


After my Viper turned into a bit of a beast, my wife made it known that it was now a scary (and hot and uncomfortable) car, and she was not too happy with it. I had to agree with her on most points. The fact that I'd put in a dropped seat kit so that only I could drive it did not help matters any.

I sold the Viper and we purchased this 2007 Lotus Elise. When we purchased it, it was bone stock. After a year of working on it, adding to it and upgrading it, it now features a Stage 2 supercharger kit from Vision Function that effectively DOUBLES the horsepower in this 2000lb car to 300hp at the wheels. It is very fast and incredibly nible.

I also added gullwing doors to help with getting in and out of it (which is a huge challenge in the stock car with the roof on). There was also a ton of carbon fiber aero parts added as well as a vinyl carbon fiber stripe kit.

At the point these photos were taken, it was exactly the car that wanted, made so just in time for me to find my next dream car...


The Noble is a very interesting car, basically assembled in three places: South Africa (racing chassis), England (body), and the US (engine installation). It features a twin turbocharged 3.0L motor that puts down about 370hp in a 2500lb car. It can do 0 to 60mph in 3.5 seconds!

This car is really what I wanted in my Lotus. Extreme performance, but a nice ride and a more polished appearance.

I actually paid for this car today (the 9th!), and I expect it to be home in about a month after I ship it to California for a full going-through by the Noble dealer there.

In the meantime, enjoy these photos of the car from the original owner in Texas: