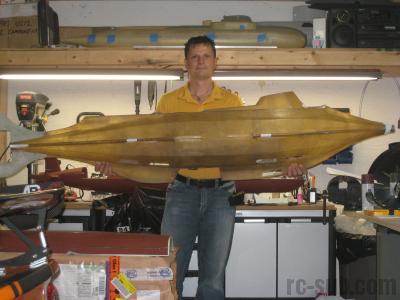 Working with so many fans of the Nautilus, I sometimes come across very interesting and rare tidbits of info and even more rarely, take possession of some really unique Nautilus memorabilia.

This was the case a few weeks ago when I was approached by a Nautilus lover who pointed me towards what he called a "Sanders" kit that he knew of for sale. Never having heard of this before, I consulted Will Babington, and he managed to relate to me a bit of the history of the man named Stan Sanders and his big, 7ft Nautilus kit.

Apparently he built these decades ago, and only just over a dozen were ever produced.

Intrigued, and now somewhat obsessed, I worked out a deal to take possession of this rare kit. I just got it home last night and got into the box this morning.

Its a real beast! Measuring almost 87" from hull tip to tail (and that's NOT including the length of the ram!), its well over seven feet in length. The hull is hand laid polyester fiberglass, and its very well done.

The small parts are a bit less impressive, but only marginally so. They're laid up in resin and fiberglass. A lot of the lack of detail is, of course, due to the fact that this kit was produced when I was still in grade school! Honestly, the kit does not show its age at all, and could have been produced a week ago for all it shows.

For now, I'm happy to have it in my possession. It will lend itself well to R/C or static display once its done up, and there is a ton of room and opportunity for any manner of working gear inside for either application.

I hope you enjoy these photos!

Here are the photos of the kit as I received it today. Enjoy!

This page will be updated once I start work on the project!