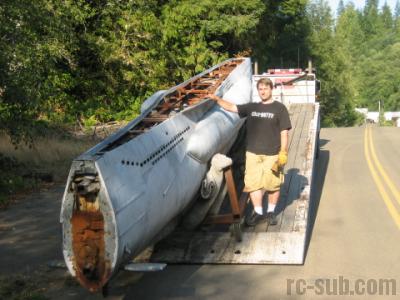 A Mr. Jim Rhode emailed my a while back with a question about a submarine that he'd seen sitting on the side of the road. Without pictures, there was not much that I could do for him to help identify it, so he set out to get some for me.

Much to my surprise, what was sent to me was an astounding replica of what appears to be a German TypeVII submarine in a huge scale! Not only that, but it appears to be a manned version of one!

Here are the original photos that were sent to me by Jim Rhode!

Here are some shots that Jason sent me of when he had the sub picked up from the side of the road!

It's been an interesting few weeks since the SubRegatta in Oregon. I met a very interesting person by the name of Jason Milsom. He and I got to talking on Sunday about this mystery sub, and what a shame it was that it was just sitting on the side of the road and rotting.

A couple of weeks later, the sub is now in Jason's yard.!

Jason did a ton of research into this model submarine, putting in dozens of phone calls to the local counties, the Sheriff's department, and anyone else that he could think of. Finally, his perseverance paid off, and he was rewarded when a Sheriff called him from his cell phone while standing right in front of the sub! Mystery Sub located! Apparently the sub had been sitting there on the side of the road for nearly six years, slowly rusting away. Many of the locals had complained about it to the authorities, but due to its size, no one was willing to take responsibility for it. Before it got chopped up and hauled to the dump, Jason grabbed a truck and picked it up.

What he ended up with is what you see below. I'll try to add some comments as I go. I took a trip out to meet with Jason last weekend, so I've seen this wonder in person.

What is it? Jason is 90% sure that its one of the 1/5 scale models used in the filming of U-571 starring Matthew McConaughey (2000). There are many unique "fingerprints" on this sub that show it to be so, the most prominent of which are the odd slanted lines running downwards from the fore and aft ends of the ballast tanks. This is not a feature found on the real Type VII u-boats. Apparently the builders took some creative license to build this model.