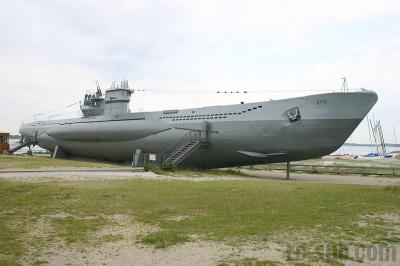 This model will be a buildup for a friend in Florida. It will be a static display (for now) hopefully with accommodations for future expansion as a fully functional R/C model. He would like it built as the U-995.


Some info on the original Type VII subs:

The Type VIIC was the workhorse of the German U-boat force, with 568 commissioned from 1940 to 1945.[72] Boats of this type were built throughout the war. The first VIIC boat commissioned was the U-69 in 1940. The Type VIIC was an effective fighting machine and was seen almost everywhere U-boats operated, although their range was not as great as that of the larger Type IX.[72] The VIIC came into service as the first "Happy Time" near the beginning of World War II was almost over, and it was this boat that saw the final defeat by the Allied anti-submarine campaign in late 1943 and 1944.[72]

Type VIIC was a slightly modified version of the successful VIIB. They had very similar engines and power, and were larger and heavier which made them slightly slower than the VIIB. Many of these boats were fitted with snorkels in 1944 and 1945.[72]

Perhaps the most famous VIIC boat was U-96, featured in the movie Das Boot.[72]

The build has officially commenced, however it might not be until another week before I really get into it.

All of the parts have been laid out, and I'm going to start with the construction of the conning tower, which is an entire model in and of itself. I managed to find an excellent build of the extended conning tower online. Feel free to check it out at: http://webpages.charter.net/sinkwich/otw_viic-41/part1.htm

For now, enjoy the photos of the parts.