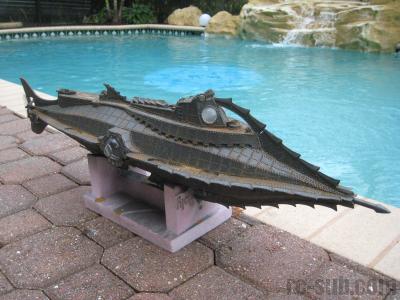 This model was created from the Total Immersions display model. The kit itself is a knockoff of the Scott Brodeen 1/69th scale model, and the parts are interchangeable between the two kits.

The TI kit is cast from a soft, white resin that makes it a challenge to use for R/C, however it did turn out very well in the end.

This model showed up to me in a quasi-started state. The former owner had done a terrible job of the preliminary assembly, as you can see from these photos.

The WTC that I elected to use was a Caswell SubDriver. I carry a better Nautilus kit in the same 1/69th scale along with the WTC in my other website found at http://www.nautilusdrydocks.com.

In some of my other Nautilus builds, I went with a set of dive planes located behind the prop. The advantage to this was that pitch control was exceptionally good. What was not so good was the fact that the model had planes there that really shouldn't be.

What I decided to try and tackle was a gimbaled prop, originally attempted (successfully) by the illustrious Dave Merriman III. The setup was fairly straightfoward, and you can see by the photos how I implemented it. Basically, rather than using water force on dive planes to affect pitch, I am now affecting the angle that the thrust itself is being produced. The end result should be very effective.

Work has progressed exceptionally well. The WTC bulkheads are in place and the WTC installed. The rudder is installed and the LED lighting system has been installed as well. I used the Nautilus Drydocks lighting system for R/C which consists of a driver board that I simply coated in rubber to make it waterproof.

The model is done!

I've painted and weathered the model with my usual rusty solution. Pool testing went exceptionally well. Be sure to watch the video below to see it in operation.

I modified the rudder slightly to accept a piece of clear plastic as an extension. In my estimation, it decreased my turning radius by 50%, which was a vast improvement!