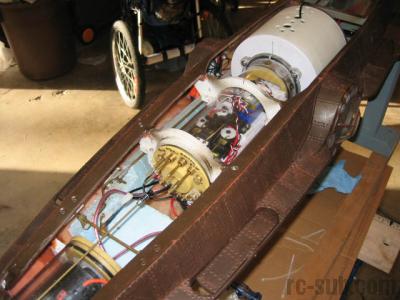 This page will show the construction of a highly modified D&E Miniatures (now sold through Caswell Plating) WTC.

The WTC itself was modified to specifically suit my scratchbuilt Nautilus project, and Greg Sharpe was instrumental in its construction.

This part of my RC submarine projects was historically the one that I was least comfortable with (and still am, truth be told). Prior to this WTC, I had tried my hand at designing my own WTC. While it was very sturdy, it was also bulky and lacked finesse.

My original design was scrapped in favor of modifying D&E Miniatures' product to suit my needs. These modifications include a modular ballast tank and motor compartment, which I'm hoping will give virtually unending combinations for any future projects that I may take on.


This first pic of of the newly redesigned motor compartment. The walls are made from Lexan, remnants of Dave's ballast tank, and the end caps are Dave's as well. The motor is my radiator fan motor, which was tested in a tank and was found to put out very decent speed and very high amounts of torque. You can see the prop in this picture with it's 30 degree pitch newly applied to the flat aluminum.
Here is the end cap for my electronics compartment. The servo has bee modified for use in rotary fashion, as opposed to the linear way that it was set up previously. Also visible is the Propel storage vessel, constructed from copper pipe and fittings, also taken from the D&E WTC. Progress is coming very quickly on the electronics compartment, and it should be completed by the end of the weekend.

Here is the finished product! Absolutely awesome job by Greg in bringing everything together.

Please notice that I've replaced almost all of my electronics with new ones provided by ModelControllers . These new electronics are fully programmable, very small, and are easily installed. The pressure hull now includes a 25A speed controller, automatic trimmer, automatic depth controller, failsafe device, electronic switch, BE/VR, and 4 servos.

This was designed so that my motor and ballast tank can be custom fit for each of my submarines, and the electronics section can be swapped out easily. I think that it worked out extremely well.
Testing of the WTC sections went extremely well. You can see the substantial wash kicked up by the propeller at half throttle. No leaks were detected after an hour in the high-tech testing tub.

Finalized ballast tank assembly, mounted to the finished electronics compartment. The tank is approximately 4.5" long and 6" in diameter. This will allow for a lot of reserve buoyancy for future upgrades above the waterline, if I so desire.

I have also placed a picture here of the access to my rear driveshaft. The rear WTC housing the motor has been mounted in place.
Here are the completed internals for the model, as of her maiden voyage on February 22nd, 2004. The main drive battery is mounted in the bow, followed by the ballast tank, electronics compartment, and then the motor compartment.