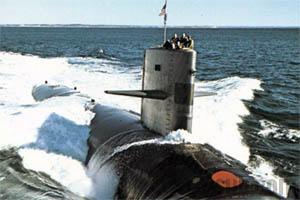 This model was purchased from a local friend in Victoria, BC. It is done in 1/96th scale and measures approximately 36" in length. I am not sure of the manufacturer, but I have a feeling that this is a ThorDesigns hull. The details are crisp and the overall quality is excellent.

The Sturgeon-class attack submarine (SSN) were the "ships of the line" of the submarine attack fleet throughout the Cold War. They were phased out in the 1990s and early 21st century in favor of the Los Angeles and Seawolf classes.

Arrived at my home!

I haven't had a lot of time to take a really close look at things, but I do know that the rear linkages for the dive planes and rudders are binding and will need to be addressed. Other than that, the model looks to be in great shape and well put together. It came with a Small World Models WTC that included the servos, speed controller, battery, and a crappy surface channel receiver (and transmitter). I don't think this model will need much to get it going, and it will probably be the first of the three models that I picked up from Phil (also including the Akula and the Albacore) that I will work on and finish, probably in the next few weeks.

I managed to put in a few hours on the weekend between packing and Father's Day celebrations to take a really close look at the sub. It looks to me like a great example of a ThorDesigns product... hand laid epoxy hull and great scribing details! The sub has never been run as far as I can tell.

I tweaked the WTC, adjusted and modified the ballast cams, and added a Subtech APC-3 angle keeper. A few hours trimming in the bath tub and she was ready for lake testing! Preliminary testing was very promising! The sub ran really well until the propel tank pulled loose and twisted, jamming my ballast servo and throwing the whole sub into "lockdown mode". Thankfully, it was close to shore and drifted back to me without much problem. A few minutes on the bench back at my workshop saw the sub back in fighting trim and ready for round two of lake trials. I need to add some more foam above the waterline in the bow, but that should only take a couple of minutes at most.

A few photos of the lake run with my son, Logan!:

I took some video of the sub in operation and of the WTC and thought I'd share it here with anyone interested.

New video of the sub with a 3:1 gearbox installed. Speed is a bit slower, but far more scale. The motor isn't working half as hard as it was previously and battery life was doubled! It really needed that gearbox installed.

Here is some video of the sub in action, including some submerged shots with my Underwater Camera!

I have taken some photos of the 3:1 gearbox and end cap. I elected to install the gearbox inside the WTC even though it was harder to do in that confined space. Doing so will put less wear on the stuffing box, as the shaft is spinning only 33% of the speed it was before. The gearbox is a tad noisy, but I think once it breaks itself in, it will quiet down a lot.